Utility regulator Robert Burns on Tuesday refused to vote for a bill adjustment for Arizona Public Service Co., saying he will not advance any of the utility’s business matters until it complies with his request to review any spending it has done on elections. “Until APS complies with my request in its entirety, I will be voting no on all APS matters that do not impact the safety and health of ratepayers,” Burns said in a statement shared with The Arizona Republic. APS is widely believed to have contributed to the successful campaigns of two fellow utility regulators, Tom Forese and Doug Little, in the 2014 elections. APS has not denied supporting independent political, or “dark money,” groups that supported Forese and Little. But the company has declined to provide Burns with documentation he has requested regarding the company’s political spending. Tuesday’s request from APS was a routine adjustment to one of the many line items on APS bills. It would have added 34 cents to the average customer bill. But with Burns’ “no” vote, Commissioner Andy Tobin’s recusal from the vote because of a potential conflict of interest, and Commissioner Bob Stump’s absence, the matter failed on a 2-1 vote. 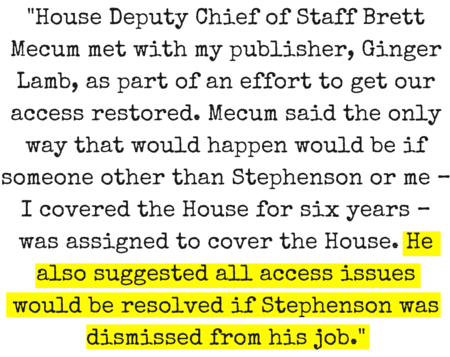 Look, a culture of corruption is THRIVING within GOP leadership — and we’ve got to stop it.

Democrats have a real shot at taking back the Senate and picking up a bunch of seats in the House. We can change the makeup of our legislative leadership in only a few months — but to make that happen we need your help.

Will you chip in today to help Democrats take back the legislature and put an end to this culture of corruption?

If you’ve saved your payment information, your donation will go through immediately:

Donate $7 to Take Back the Legislature >>

Donate $15 to Take Back the Legislature >>

Donate $35 to Take Back the Legislature >>

Donate $50 to Take Back the Legislature >>

Or, donate another amount >>

Early and absentee voting is changing the face of elections in the United States. Casting a ballot before Election Day allows campaigns to build advantages – sometimes significant ones. In the Arizona presidential primary Tuesday, the early vote will be pivotal in determining the outcome. Arizona has a very high early and absentee voting rate. In the 2012 Republican presidential primaries, around 75 percent of 505,613overall ballots cast were of this type. Who wins the absentee vote in Arizona has a very high likelihood of winning the state. In the 2016 presidential primaries, as of March 21 (see below for exact dates county by county) 297,714 Democratic and 371,693 Republican voters have already cast ballots in Arizona. This is according to data obtained from NBC’s data partner TargetSmart—a leading voter-file company in the United States. NBC News According the TargetSmart data, 29 percent of registered Democrats and 31 percent of registered Republicans have already cast ballot. Arizona is a closed primary state, meaning that those registered as independent or “other” would need to update their voter registration by February 22, 2016 to be eligible to vote in either the Democratic or Republican primary.

Source: What Does Early Vote Say About Who Will Do Well in Arizona? – NBC News

PHOENIX — An Arizona congresswoman introduced a bill Monday that would allow DREAMers – undocumented young people exempted from deportation – to be employed by congressional offices. U.S. Rep. Ann Kirkpatrick, D-Ariz., introduced the American Employment Act to open up jobs to DREAMers, whom she says would benefit Congress with “their unique abilities and perspectives.” “DREAMers are young people who call our country home, and they deserve a fair shot at opportunities that can shape their future,” Kirkpatrick said in a release. “Telling these young people they cannot work in the seat of our government is like telling them they deserve something less than the American dream.” Kirkpatrick’s colleague, U.S. Rep. Ruben Gallego, D-Ariz., is one of the original co-sponsors of the bill. “They are a part of our community, and rather than making their lives more difficult, we should celebrate their contributions and give them opportunities to succeed,” Gallego said in the same release.“These talented, smart individuals have a lot to contribute, and we would be fortunate to have them working with us on Capitol Hill and at home in our districts.”

Arizona House Democrats are complaining that some representatives are apparently carrying guns on the House floor. Rep. Randy Friese and five other Democrats sent a letter to Speaker David Gowan Wednesday asking him to clarity in writing whether members are allowed to be armed. The letter says the House has a sign requiring weapons to be checked at the door so being armed violates state law. Gowan spokeswoman Stephanie Grisham says he took down the “no weapons” sign at the members’ entrance, so there is no legal bar on armed people entering that door. Friese said he saw a lawmaker with a gun on Tuesday. He says he asked the Speaker to clarify the rules and got no response. Friese declined to identify the member or their party affiliation.

PHOENIX (AP) — Hours-long waits for some Arizona residents wanting to vote in the presidential primary have led to accusations of voter suppression from Democrats and civil rights proponents who cite a decision by elections officials to slash the number of polling places this year. Residents in metro Phoenix have been bristling for years over a perception that state leaders want to make it harder for them to vote, and the mess at the polls Tuesday only heightened their frustration. Republican lawmakers passed a series of measures in recent years aimed at cracking down on voter fraud, but opponents believe the changes were merely ploys to stifle Democratic turnout. Those battles are being waged again after people waited in line for five hours to vote in some places. “Let’s be clear — voter suppression happened,” U.S. Rep. Ruben Gallego said at a news conference Thursday, adding it might not have been intentional, but it happened nonetheless.

With the 2016 legislative session set to kick off Jan. 11, Arizona lawmakers have introduced just over 100 bills. Legislators can introduce bills throughout the session, but file most within the first few weeks. Typically, lawmakers introduce more than 1,000 proposed laws and pass about a quarter of them. Democratic lawmakers introduce their fair share, although as the minority party, few of their bills are ever given public hearings, much less a formal vote to become law. Here are some of the Hail Mary proposals Democrats have filed: Motorcycle helmets: House Bill 2052 would require all motorcycle riders to wear a helmet. The current law requires helmets only for riders under age 18. Sponsor: Rep. Randy Friese, D-Tucson. Portraying homosexuality: Senate Bill 1019 would overturn the current state law that prohibits public schools from teaching anything that may promote a homosexual lifestyle, portray homosexuality as a positive lifestyle or provide information on safe-sex methods for homosexuals. Sponsor: Sen. Martín Quezada, D-Phoenix. Medically accurate sex ed: Senate Bill 1020 would require public schools to provide sex education in grades K-12 that is “age appropriate” and “medically accurate.” Parents could opt students out of sex ed teaching, instead of the current requirement to opt in. Sponsor: Sen. Andrew Sherwood, D-Tempe. Legalizing and taxing marijuana: Under House Bill 2007, individuals age 21 or older could possess, consume, use, purchase or transport 1 ounce or less of marijuana legally. They may also grow up to five marijuana plants. It would still be illegal to smoke marijuana in a public place. Marijuana would be taxed at $50 per ounce, with revenue going to law enforcement, education and drug programs. Sponsor: Rep. Mark Cardenas, D-Phoenix. School superintendent: House Concurrent Resolution 2002 would ask voters in November to allow the governor to appoint the superintendent of public instruction. It is currently an elected position held by Republican Diane Douglas. Sponsor: Rep. Randy Friese, D-Tucson. Arts funding: Senate Bill 1023 allocates $20 million from the general fund to the state arts endowment fund. Sponsor: Sen. Steve Farley, D-Tucson. Undocumented immigrant licenses: Senate Bill 1025 would repeal the current Arizona Department of Transportation practice of prohibiting undocumented immigrants from getting a driver’s license. Sponsor: Sen. Martín Quezada, D-Phoenix. Charter-school teachers: Senate Bill 1053 would require all charter school teachers and administrators to meet the same requirements as district teachers and administrators, including teaching certification and fingerprinting requirements. Sponsor: Sen. Martín Quezada, D-Phoenix. Green buildings: Senate Bill 1046 requires that, by 2021, all state agencies, universities, school districts and community colleges must get at least 10 percent of their energy from green sources. State buildings must reduce energy use in public buildings and new or larger buildings must conform to environmental building standards. Sponsor: Sen. Andrew Sherwood, D-Tempe. Automatic voter registration: Under Senate Bill 1007, everyone who obtains or renews an Arizona driver’s license and is qualified to vote would automatically be registered to vote, unless the individual elects not to register. Sponsor: Sen. Andrew Sherwood, D-Tempe.